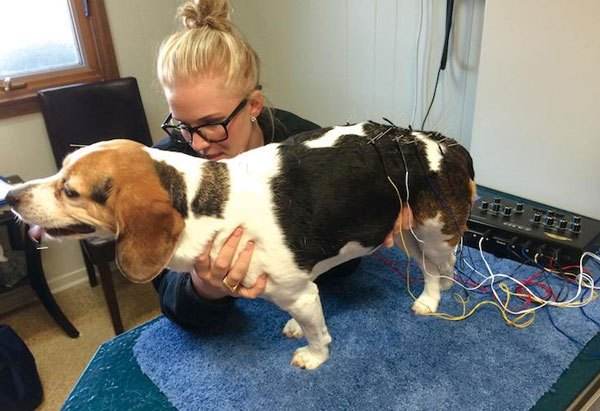 Acupuncture, the traditional Chinese therapy in which needles are inserted into points on the human body, has found a new market: pets.

A pet clinic in Shanghai caused a stir recently by using acupuncture to help paralyzed pets such as dogs and cats.

Jin Rishan, a vet at the center, said he learned about animal acupuncture in the Republic of Korea (ROK). He opened the clinic with the help of two others, and imported equipment from the ROK at a cost of 3,800 yuan (576 U.S. dollars).

"I receive up to 20 pets on a daily basis," Jin said. "The pets are mostly dogs and cats, but there are also other species, like rabbits. Once there was even a marten."

In Jin's center, equipment such as disposable acupuncture needles, electric acupuncture apparatus and infrared physiotherapy lamps can be seen in operation.

Puppies are usually strapped on the apparatus, and silver needles are inserted into their backs, legs and faces, while electric wires are attached to their bodies.

A course of acupuncture treatment consisting of ten sessions costs 220 yuan, while oral Chinese medical powder costs up to 90 yuan per day. If owners prefer to let their pets stay in the clinic, there are extra costs.

Jin said the clinic had treated more than 2,000 pets.

For Wang, the clinic offered hope for her four-month-old dog "Little Sister," which was paralyzed after an accident two months ago.

"Vets in other pet clinics told me that my dog could not be healed, and that the only way to help her feel less pain was euthanasia," Wang said. "She could not move or eat at all at first, and I had to give her liquid via needle tubes."

With hope vanishing, Wang took her puppy to the acupuncture clinic, hoping the traditional Chinese therapy might work.

"I have always believed in acupuncture," Wang said. "I believe my Little Sister will stand up and walk again."

Wang takes her puppy to the clinic almost every day except on Mondays and Tuesday mornings when the clinic is closed. Each treatment session takes about 20 minutes, including shots and moxibustion. Chinese medical powder has also been prescribed for Little Sister to eat at home.

After a period of treatment, Wang's dog can now eat by herself, she said, although standing up and walking were still difficult.

"Even if she cannot be healed, I will still stick with her," Wang said.

"Old Companion" is a three-year-old Schnauzer with lumber disc protrusion and incontinence. The dog's owner Zhu Yuhua took him to the clinic after finding out about it online.

"Old Companion was always screaming in pain in the past, but he slept very well after the first acupuncture session," Zhu said. "After the 12th session, he was able to stand up."

Zhu lives in Shanghai's Jiading district in the north of the city. Taking Old Companion to the clinic means two hours of travel, high taxi costs and asking for sick leaves from her company. But Zhu is determined to help her companion recover.

"Being with my dog and seeing him healthy makes me happy," Zhu said.

Zhu said that recent media exposure had drawn a large number of people to the clinic, and that she has to stand in queues to get her dog the therapy.

"My dog is like my little child," said Zhong, owner of a German Shepherd named "Little Five" that was paralyzed at birth. Zhong took his dog all the way from Wuhan, capital of central China's Hubei Province, to receive the acupuncture.

"I will try to heal my dog at all costs," he said

For Jin, good business does not mean he will open more branches just yet. He said that pet acupuncture was not that easy to learn, and that he was focusing on finding the exact acupuncture points in pets.

"My energy is limited, and I only have one assistant." Jin said. "And pet acupuncture is not that easy to master."

Raising pets is increasingly popular in Shanghai, which has more than 24 million people.

The Shanghai Animal Health Inspection Institute said that more than 170 pet clinics were in operation in the city last year.

Water volume of Hukou Waterfall surges due to heavy rainfall

China Flower Expo to kick off on Sept. 1

Over 17,000 Texans spend Monday night in 45 shelters across state

At least 2 died, 8 injured in knife attack in Turku, Finland

13 killed, over 100 others injured in Barcelona attack: official