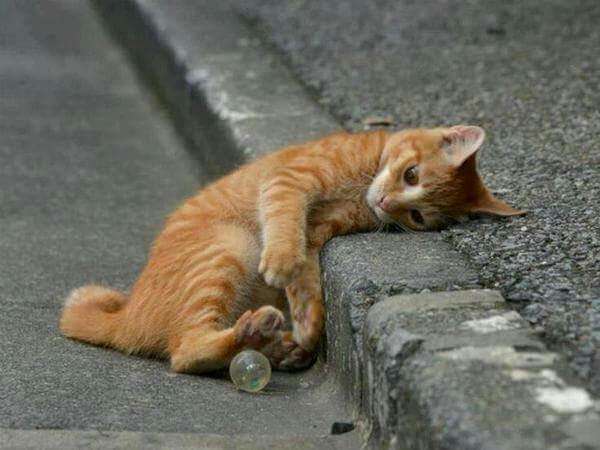 A cat is for life， not just for Christmas， and now Beijing residents will get the chance to spend quality time with their potential pets before deciding to adopt them.

It is a fashionable space， providing a comfortable environment for man and cat， where interested adoptive families can enjoy close contact with their feline family-member-to-be.

"We hope that the Cat Chalet serves as a showcase for people's tenderness and love for rescued stray animals to become visible to the public，" said Yang Yang， co-founder and executive director of Beijing Adoption Day. "In China， caring for and adopting rescued stray animals has become a much-loved trend."

The pet adoption center is indicative of Chinese society's increasing love of keeping animals as pets.

"It is delightful and inspiring that Chinese society is exhibiting a stronger consciousness of animal welfare，" said Zhang Yue， a China Central Television host and co-founder of Ta Foundation， the country's first animal protection organization.

"On a global level， the project puts into practice a brand-new notion of how to join forces between non-profitable organizations and private businesses in the promotion of stray animal adoption，" said Dr.Sun Quanhui， a scientific consultant for World Animal Protection. "The adoption experience center will help build a connecting bridge between the increasingly large part of the population that hopes to keep companion animals and the equally big number of rescued stray animals."

HOW DOES IT WORK?

"When you spot a stray cat in need of help， take it in and apply for a Beijing Adoption Day TNR fund (TNR stands for trap， neuter， return and is a widely accepted method to control the stray population) coupon that covers its neutering costs at more than 60 local veterinary clinics，" Yang said.

If the rescue proves friendly and suitable for adoption， you are welcome to apply for the animal to move into the Cat Chalet.

Feline veterinary specialists with Naja Clinic will give the candidate a thorough checkup to make sure it is healthy， vaccinated and neutered， and has a sociable， affectionate personality.

Once qualified， the lucky feline can move into the Cat Chalet to be a formal tenant， where it will receive attentive care provided by veterinary professionals and pet fashion stylists， and live like a cat celebrity of the Internet age.

Each cat has its own social media account and a 24-hour live webcam show， enjoying quality play time with those who hope to take it home as a permanent family member， as well as being profiled， filmed and photographed by cat fancying media.

After the interested adoptive family passes clearance to exclude those who have a history of animal abuse and neglect， the rescued stray leaves the Cat Chalet to live happily ever after with its human family and a new tenant takes its place.

Before departure， Naja clinic examines the adoptee and provide its health certificate as well as additional services including disease tests upon request.

"It is guaranteed by the country's best feline veterinarians that the rescued strays at the Cat Chalet are the healthiest and the most suitable for companionship，" said Wang Hui， veteran feline veterinary specialist and director of Naja.

As a cat lover and veterinarian， Wang hopes that the healthy and lively tenants at Cat Chalet will help dismiss the erroneous prejudice that stray cats are less hygienic.

"I think it is a great thing，" said Mariya， a Russian expert on the humane treatment of animals.

"Adoption Day has developed from a social platform to this kind of visiting center，" she told Xinhua. "It is also not too far away from the city center， as many shelters are quite far from the city， which makes it difficult to bring people there".

"I come from Russia and I am not sure Russia is as developed in terms of animal welfare as other European countries are，" she said."[Compared to Cat Chalet] we have certainly fallen behind."

Some countries have adoption centers for rescued strays， but the Cat Chalet is on a different level.

The center is also a great example of what can be achieved when merging off-line and online techniques.

"The growing trend of adopting stray pets is a wonderful and much needed phenomenon in Beijing. There's a huge number of dogs and cats that need a loving home，" said Steve Blake， a long-time American resident in Beijing and pet owner. "This is an issue all over the world. The US has many well-established pet adoption and rescue centers. Beijing is catching up fast ... There is still much work that needs to be done though， as we're still in the early period of a pet adoption culture， he said.

"The Adoption Experience Center project only marks the beginning，" Chen Jia， co-founder of Beijing Adoption Day said at the opening ceremony. "If it is proven to actually work， we would love to share the cooperation model with other cities in the country and the rest of the world."

Under the slogan "Adopt; Do Not Shop，" Beijing Adoption Day has been campaigning to provide homes for rescued stray animals to love and be loved.

Founded in November 2011， the charity and its team of volunteers have so far organized 48 off-line events where more than 3，000 rescued stray animals were adopted.

In the meantime， rescuers actively publish information on animals who need a home through their microblog and social media platforms.

Famous actresses Sun Li and Gao Yuanyuan， as well as many other Chinese celebrities have shown support for Beijing Adoption Day.

"We are proud that we have been casting a positive influence on people， and things have been changing towards a promising direction" said Yang Yang， who calls herself and her friends "dreamers."

Since 2015， the Adoption Day experience has reached more than 30 Chinese cities， with groups of volunteers working to promote stray animal adoption.

"Beijing Adoption Day is one of the better known platforms with a professional system in place to ensure the animals are healthy when they reach their new home，" Blake said.

"Our ultimate goal is that one day we will no longer need to organize off-line events， and that one day the adoption of a companion animal has become a part of every Chinese family's plan by default" Chen said.