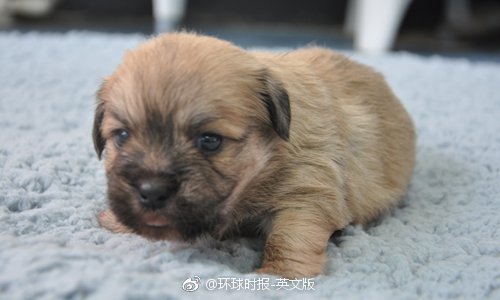 Doudou, a cloned Schnauzer, was born this August and is an identical twin of a 12-year-old pet dog with the same name. Photo: Courtesy of Sinogene

"When she was gone, I felt my life could not move on. It was as if my own child had died," Jin, from Shanghai, told Pear Video. "So I wanted to extend her life."

Pet dogs are increasingly becoming a part of Chinese family life. Some 33.9 million households in China own a total of 50.6 million pet dogs, and Chinese is expected to spend 105.6 billion yuan on dogs this year, according to the 2018 China Pet Industry White Paper, a report published by pet ownership website goumin.com.

Pet dog cloning is the latest addition to the expanding pet market in China. Since last September, Sinogene, a Beijing-based biotech company, has been offering pet dog cloning services at a price of 380,000 yuan. Another Chinese company, BoyaLife, is cooperating with South Korean dog cloning company Sooam to launch similar services in China, according to its website.

"So far, we have had over 20 clients. We've already cloned about 10 pet dogs, and another 10 are gestating," Zhao Jianping, deputy general manager of Sinogene, told the Global Times.

Zhao says to clone a dog, tissues need to be taken from it either when it's alive or within a week after it died, under refrigerated conditions. Scientists from the company will then take an egg from a donor dog and replace its nucleus with the cell from the dog being cloned. After an embryo develops, it will be placed inside the womb of a surrogate dog. About one out of two cloned embryos will develop into a puppy.

Zhao said the company can clone any dog regardless of its breed. The company has cloned Schnauzers, German shepherds, Pekingeses and poodles. After clients place an order, it usually takes around six months for them to receive the cloned dog.

In 2005, Snuppy, an Afghan hound credited as the first cloned dog, was born in South Korea. Since then, only two countries, South Korea and the US, had been known to have commercial dog cloning businesses.

In recent years, instances of cloning pet dogs have been rising. This February, US actress Barbra Streisand revealed to Variety that she cloned her pet dog of 14 years. The former president of Iceland is also intending to clone his 11-year-old dog, according to Icelandic media.

But the business is being met with huge controversy, with many questioning whether the procedure is ethical and whether it's a waste of scientific resources to clone pets.

"I can totally understand dog owners who choose to have their dogs cloned. If I had the money, I'd preserve the genes of my dog Strawberry for future cloning," one Weibo user wrote.

Another commented, "This is stupid. Cloning will not prolong the life of the original dog, but only create another dog that looks similar. It will not have the same memory as the original dog."

Zhao said, "For our clients, what they care most about is whether the new dog feels like their old pet. Although the cloned dog has no memory, what's most important is that it will carry the characteristics of the original dog and remind the owner of it."

As for ethical issues, Quan said unlike human cloning, animal cloning doesn't face as many ethical objections. However, companies need to respect regulations on lab animals.

Zhao said his company abides by China's regulations on lab dogs, and many surrogate dogs are adopted by pet owners after they give birth to a cloned puppy.

The company said it is also working with police dog training bases to replicate and amplify the traits of working dogs through gene editing technology.
The company is also experimenting with cat cloning, which will be ready for the public soon.